skip to main | skip to sidebar

I'm not consistent in my postings, but hopefully I make it worth the wait.    The last couple of weeks have just flown by.   I have dabbled in lots of craftiness and even made it out into the great outdoors in the dead of winter.    By the way fellow crafters, have you had your Vitamin D checked - mine was a colossal failure.   Some of those aches and pains you may be attributing to your art, could well be a lack of Vitamin D.  Get it checked - it is important - we don't want broken bones.

The title of this post relates to a set of embroidery designs I have been working on this week.   I first started playing with them back in about 2008, (I am a bit like the dog in the movie "UP"   -   idea, idea, squirrel) whilst having a clean up of the hard drive (see what I mean) I rejigged and added and now have this set that I will put up for sale on Etsy later this week.    Whilst not true to African Masks, they are all based on that idea, hence the name, Nearly Tribal.   These have been designed for the 300 x 200 embroidery hoops and there are twelve in the set.    If interested you can also contact me
through the address on the side bar or check out Etsy . 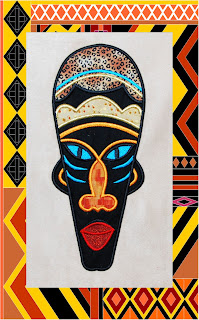 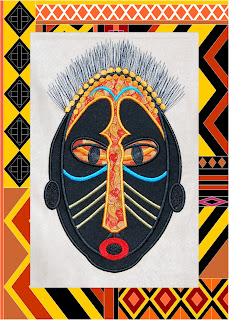 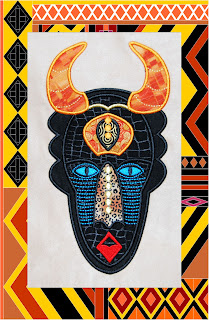 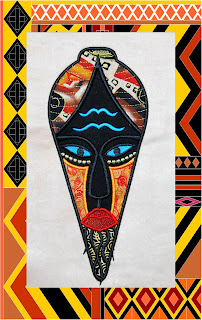 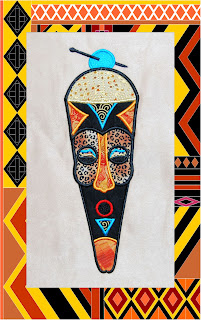 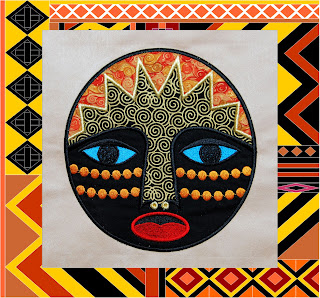 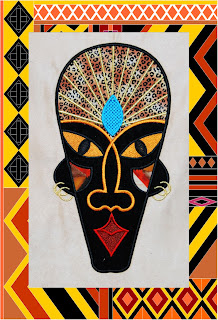 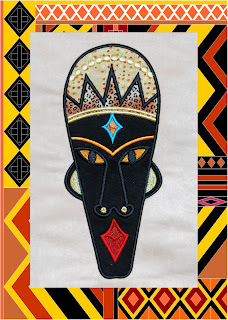 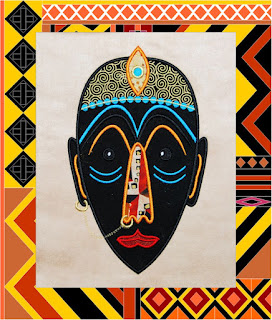 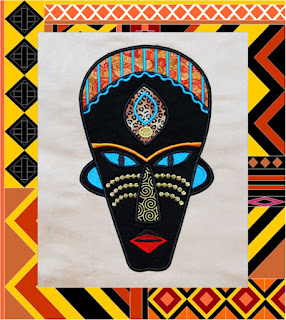 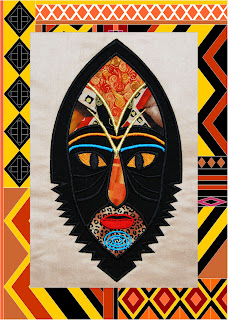 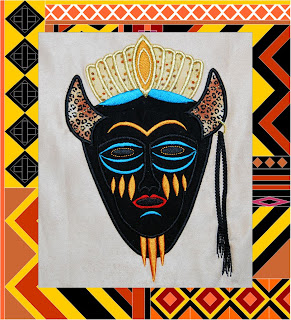 (I should add that the framing is from Paintshop Pro)   I found the perfect fabric to go with the design - only problem of course is I was only able to obtain two fat quarters.   Anybody out there have some Etosha Tiger Stripe in Tan......anybody......  The background fabric is a genuine fake suede.

Have you seen the site  "Ikea Hackers".    I saw this sensational chest made up of  Fira Boxes from Ikea.  Naturally, because I don't have too many projects on the go - insert sarcasm here, I have made a start on my version of it. 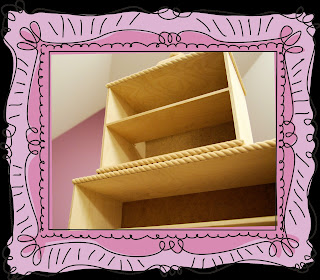 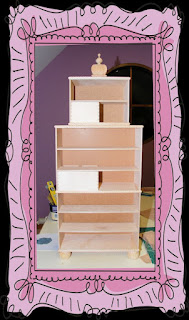 The home handyman cut some 7mm ply to use as a base and as a filler between the top box and the larger box and finally one for the very top.   This gives enough depth for the drawers to open when the rope twist is in place.   The drawers will be turned around so the finger pull is at the back and new handles will be installed.    I have managed to collect some fabo scrap booking papers that will be used to decoupage the drawer fronts.   Think Gothic/steam punk/apothecary theme.  The Melbourne Craft and Quilt fair last week, yielded an interesting assortment of dingle dangles that will possibly used as the drawer pulls.   We will see how it all pans out. 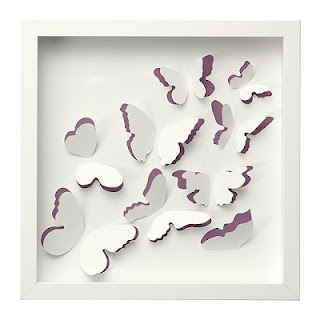 Also from the "Ikea" file.   I bought a couple of these artworks from Ikea.  The frame is like a dimensional display type.   Of course, the design was secondary to the frame.   I pulled both of them apart, found a nice plain scrapbook paper to use as the backing, and with a trusty Martha Stewart butterfly punch and all the paint chips I had collected in seaside colourings, I went to work and produced these.   Much better than real dead butterflies under glass.   I used the foam sticky dots just down the centre of the bodies to keep them in place.   (The photos are a last minute IPhone job - sorry). 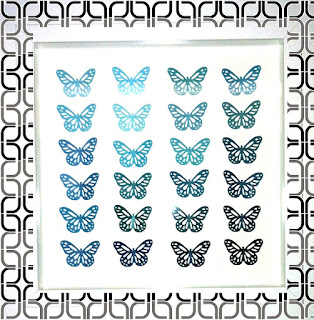 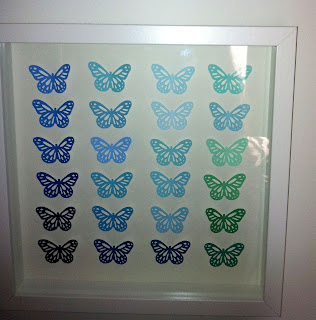 I wonder if Bunnings has had a significant increase in the amount of paint chips they go through.    Pintrest has a lot to answer for!

Also in the dodgy photography department are these pieces.    If you remember the chess table from a previous post, this box got a going over with the same range of paper, and a suitable blue paint.   We now have a very stylish box to keep the checker pieces in.    I think the box originally was used for tea bags  (don't worry it wasn't an antique or anything and will now live a more productive life).   I added small drawer knobs to give the box  mini bun feet (carefully glued in to position with good old Liquid Nails). 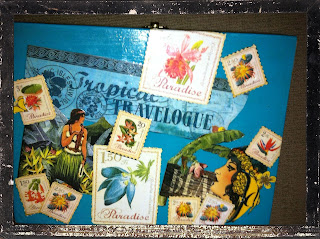 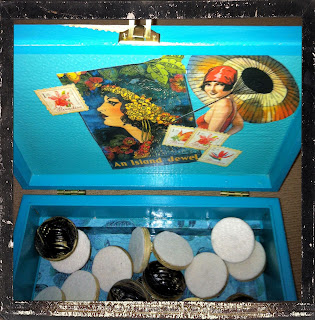 The home handyman was again put to work, this time cutting circles in ply.    I found some resin sea shells at Spotlight (12 per box, how fortunate) and glued them on the discs - 12 were painted cream and 12 painted black.   I then rubbed gold paint into the cracks and finished off with beeswax.    Now there is of course one small problem with doing checker pieces like this - I didn't know the rules - the pieces  need to stack but that hasn't hampered anyone so far! 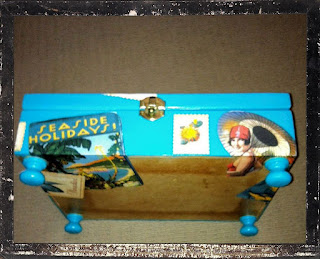 Now it wouldn't be a post, if O'Reilly didn't make a showing.   First, I must set the scene. We had a short break in Merimbula two weeks ago.   The Elf, the dog and myself went ahead as my family were all joining us and I had a few things to set up before everyone arrived.     We have a tiny backyard at our holiday place.   We had a piece of decking built to keep mowing down to near zero.    When I arrived with the dog, it soon became apparent that the fence was now too low - lowest point at my hip.   Dog was going to have to sleep inside - in fact, nothing new really - he is always inside!    So the light coloured couch was going to be problematic.    Dog went to sleep on his bed, good dog.    I get up first thing next morning - he stayed on the mat alright ......... 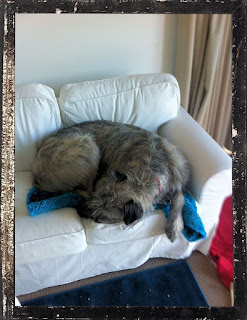 .....just not the one he went to bed on when I left him.   As this was going to be a battle that I couldn't win, I took to covering the couch each night.    As I said I had things to do.   Whilst out I get a text message from the kid - the dog who cannot climb into my tiny car for love nor money, had managed to jump on to my bed.... 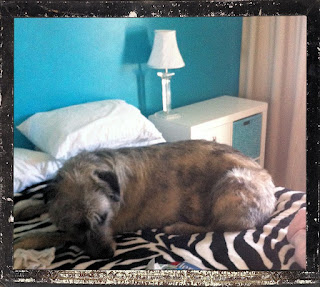 This is one of those pillow top beds so it is quite high.    I was dreading going to sleep to have him suddenly land on me in the middle of the night.   Luckily, the couch was easier.  Just like having your very own Goldilocks! 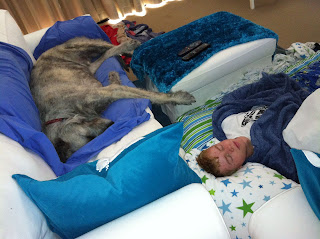 As you can see from the picture below, O'Reilly can take up a lot of room when he wants. 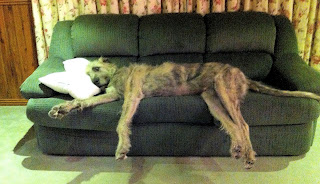 We now have a boat - just a little one so we can fish and I can try and take photos of birds and scenery.      For the first trip out, O'Reilly had to stay at home.   He had a bone, food, water, sleeping quarters, everything a dog needs.....   The first trip almost ended up a disaster - as newbies the boat slipped off the runners on the trailer with such force, that if my brother in law hadn't been hanging on to the front of it, it would have gone straight down - with my camera.   Anyway, we had a short getting to know the boat trip     When we got home, the neighbour was in the garden and I happened to ask how "the baby" was.    It wasn't good.   Apparently he cried mournfully and howled  for the entire time we were out.  Our next trip out he had to go into doggy day care.      The last day of our break, when all the family had left, we took him out with us.    O'Reilly is at his happiest when he is with his family - even if that means being in a boat.    Not being known for his agility skills, we did wonder how he would go (and we where in a lake that is shallow in lots of places) but it is amazing how some leftover breakfast bacon can increase a dog's agility skills.  He slept for most of the outing whilst we fished. 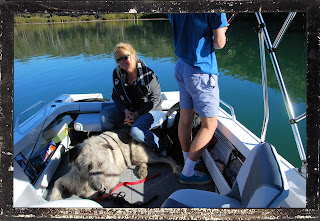 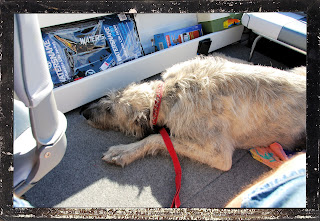 As you can see, the fishing was poor - the sunshine was lovely, the fishing not so.   Maybe come the summertime the flathead will have grown. 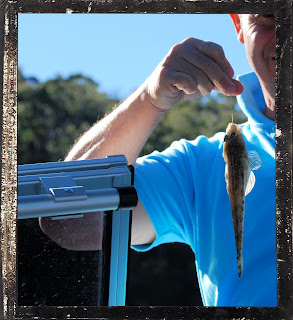 Do you find yourself photographing things at your feet that nobody else noticed.   This little bit of pavement had a school of fish swimming through.

And just to finish, here is a closeup of Norman.    Such a face - should be called "The Worrier". 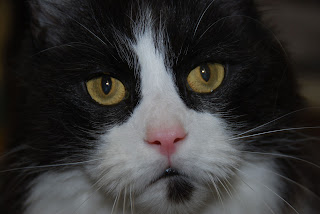 I would love to hear from you, just so I know I am not talking to myself - the cat is tired and so is the dog!

Promote Your Page Too

QUILTS MADE BY ME!